To have the optimal experience while using this site, you will need to update your browser. You may want to try one of the following alternatives:

Containment: The Weapon of Choice in Mold Remediation 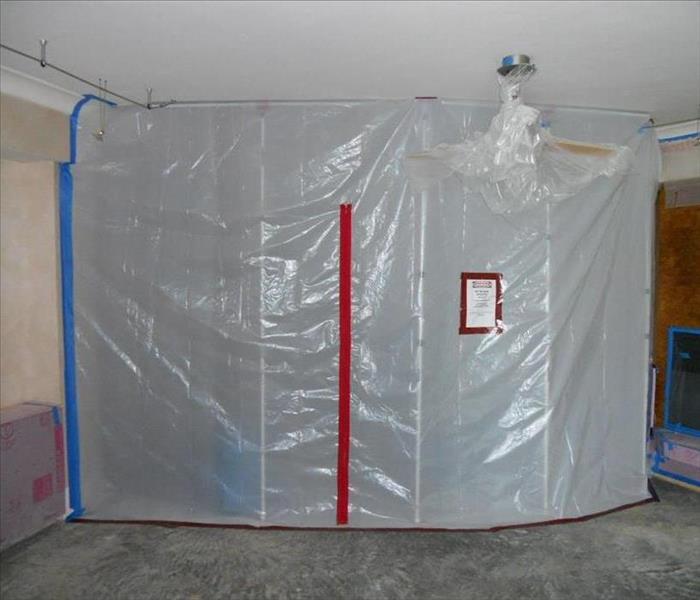 Containment of a mold affected area.

As a “mold warrior” or more commonly known in the correct circles, a mold remediator, you are constantly fighting a war.

Whether daily, weekly or monthly, you battle against a very small, incredibly durable, micro-sized enemy, invisible to the naked eye.

This enemy has the ability to survive a wide range of temperatures, can withstand harsh chemical attack, cannot be drowned and has an uncanny ability to camouflage itself among the most ordinary dust.  Give it a bit of food and moisture, and it will reproduce itself at such phenomenal rates that even the most sophisticated video processor available would have difficulty showing the process on your X-Box console.

We're talking about fungal particulate- whole intact spores capable of germinating, broken spore fragments, and pieces of the bodies of living and desiccated molds which, when inhaled by unsuspecting human hosts, can have drastic health effects.

The great mold warriors we meet and work with on a daily basis all have a common advantage- like the greatest generals in history, they know their enemy. More specifically they know and understand that the greatest strength of their enemy is its invisibility.

Before your own battle begins, you have to understand that you must strategically approach the enemy by devising systems to discover, collect, and contain it which will work despite your inability to visualise its presence.

Since we know our enemy, we know it's greatest weakness - it cannot move on its own accord.  It is entirely dependent on air currents to power its invasion. Manage the skies, and you will win the war.

Erecting containment and generating and directing the air flow within that containment will enable us to win the air war, by controlling the enemy's movement.

Where is the most strategic location of this containment?  It should be placed as close to the source of invasion as possible while still permitting us to gain access and accomplish our work.

Taken to its extreme, if it allows you to do what you need, it can be as small as a glove bag over a pipe, such as is used by our asbestos warrior brethren.

One of the most common flaws in mold remediation projects is a containment structure that is larger than it needs to be:  Larger containments require more equipment for managing airflow, have more possible leak points, and require more time and effort to decontaminate prior to de-mobilisation. While erecting a containment, one must carefully balance the trade-offs between size and work access.

To do so, one can rely on the knowledge of experienced mold warriors and follow the established principles.

Choose the smallest possible surface area with the fewest "seams" that will get the job done cost-effectively.

A curtain is the structure for our containment but a curtain does not cause air to flow.  Fans cause air to flow.  If we are to control the air war, we need to control the airflow. For true functionality, we need fans capable of creating a pressure differential of sufficient magnitude that it can overcome any other air currents, but not too strong that it creates eddy currents in the opposite direction (watch the area upstream of a large rock in a swift-flowing river and see the direction of flow of fallen leaves.  Air is just thin water, both are fluids, and both behave identically). To control the air war, control the airflow by sealing the edges of the containment.

Effectively seal the edges of your containment.

The amount of suck we apply to our containment is determined by the amount of leakage, regardless of the size of the internal area of the containment (really!).  Build a containment with minimal leakage, and a specified pressure differential can be maintained with a small fan. Build one with lots of leakage and it will require a lot more suck to be effective.

Sealing the edges will ensure that the leakage into the containment comes mostly through the intended pathways - the traffic area for personnel and equipment, and the waste removal area (these can be the same).  We will need inward airflow in these transit areas to prevent dust containing our enemy to escape by hitching a free ride alongside people and equipment.  (Stealthy, huh?)

Build a containment where most of the volume of air exhausted by the fans is used to overcome diffuse leakage from poorly sealed edges and the directional airflow will not be easily achieved and maintained where it is most needed.

It should go without saying that leaving gaping holes (or multiple small holes) at the edges of the containment will dramatically increase the amount of fan power necessary to ensure inward flow of air.  Leave a large enough effective leakage area, and your chosen fan will not be big enough to create inward flow.  How to be sure we've not made this mistake?

Whether you express this differential in pascals (metric) or inches of water column (an obsolete system surprisingly still used by otherwise intelligent people) it should match your company's SOPs or the job specification’s recommended pressure differentials for containments. The correct differential will provide sufficient flow for controlling our enemy's movements without creating eddy currents allowing them to sneak through our defenses.

Build a good containment with sealed edges and monitor the pressure differential and you effectively have both structure AND functionality.

Ensure that the make-up air entering the containment is free of both fungal particulate and general particulate by minimizing the volume of air and HEPA filtering it prior to entry.

There is another reason to properly seal the edges.  Since our enemy is camouflaged within ordinary dust, all leakage points are sources for the entry of external dust.  There are two ways this can lead to problems.

Therefore you cannot get away with a sloppy leaky containment and more fans, even if they are maintaining adequate pressure differential. Install the HEPA filter in a location that creates the airflow through the entry/exit points that is most beneficial.

Follow these four principles, and shortly you will find your rising up the ranks to command your elite warriors.